If space is the final frontier, it’s food that will get us there in good shape, and UBC researchers are making sure that our food will be up to the task.

Dr. John Frostad, an assistant professor in chemical and biological engineering who studies the science of food, leads a team that is creating new ways of encapsulating omega-3 fatty acids so that they can go the distance.

Omega-3 is essential to mental sharpness. Even a couple of days without omega-3 in our diets may dull our brains and have us feeling less than our best. However, our bodies cannot produce it naturally so we must find it in the foods we eat, such as fish, flaxseed, or often by taking supplements.

“For astronauts and others on space missions, the difficult part is ensuring that omega-3 stays fresh and viable in whatever form—capsules or liquid—it is stored in,” explains Dr. Frostad.

“The shelf life of most omega-3 capsules is around two years, but space missions can go for longer than that and they must be self-sufficient. You can’t do a grocery run every couple of months. Studies also show that expired omega-3 supplements can have carcinogenic properties, so the stockpiles that you do have should stay at their absolute best.”

There are currently no surefire ways of preserving omega-3s for longer than two years but the Frostad team thinks they have some pretty good contenders.

A current approach they are testing, in concert with ingredients manufacturer Ingredion, is to encapsulate the omega-3s in quinoa powder.

“Potentially, we could embed the essential fatty acids in quinoa starch to create something you could blend into a smoothie,” notes Cody Rector, a graduate student in the Frostad lab who is currently pursuing his master of science degree in food science.

Another contender is cellulose nanocrystals (CNCs) – very tiny crystals derived from wood fibres with unusual properties that make them capable of stabilizing mixtures of oil and water.

“CNCs could one day be used as a naturally sourced additive in emulsions that contain omega-3’s or other essential fatty acids,” says Dr. Roxanne Fournier, a postdoctoral researcher in food science who studies the effects of spaceflight on biological systems and ways of improving food and nutrition for crewed spaceflight. 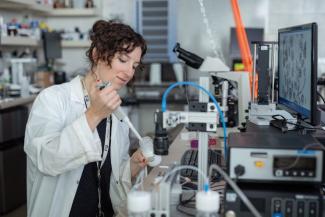 If the team succeeds, their work could influence how fats are packaged into foods for space missions.

Dr. Fournier, who in addition to her work at UBC is also working on projects funded by the Canadian Space Agency to improve health in space, explains: “Foods that astronauts bring into deep space often need to be rehydrated, and the resulting texture can be watery or mushy and not very nice.”

Once food manufacturers can effectively package fat using the techniques the Frostad team is developing, then fats can be added easily to foods to make creamy-tasting coffees and smoothies, for example.

“Food fatigue can be an issue for astronauts eating uniform textures day in, day out,” says Dr. Frostad. “Properly encapsulating omega-3s will not only prevent malnutrition, it can also make future space diets more tolerable and, well, nicer to eat.”

“Increased shelf life has clear advantages for consumers who can safely store food longer as well as grocery stores that can stock products longer,” says Dr. Frostad. “The current war in Ukraine has really shaken supply chains for many items, so products with longer shelf lives could help lessen the negative impacts of such events in the future.” 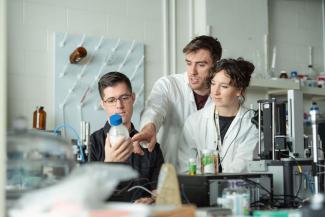