The UBC Landscape Architecture 25 'ish' Year reunion included alumni from graduating years 1992, 1993, and 1994. We had a great turnout with classmates making the trip from Switzerland, California, Calgary, Whistler, the Caribou, the Island and from every corner of the lower mainland. Professor Patrick Mooney led the group on a tour of the new Studio and we were able to see how the program has changed and developed over the years. We were entertained with a slide show of photos from our studio years - no, we have not changed a bit, as well as by a few fellow alumni who gave presentations on what mischief they had gotten up to over the last 25 years. A fantastic dinner followed at Sage. The party carried on at Koerner's Pub where many growlers were enjoyed by all. Saturday gathered a few more souls at Sue and Hugh's house for a catered Southern BBQ - it was a relaxing time where we swapped stories and generally rabble-roused and we even had a book signing by Professor Moura Quayle. Everyone agreed we would plan another reunion sooner than later! We are lucky to have graduated from such a creative and inspiring program - our small but close knit
group will always celebrate the bond of being a UBC LARC. 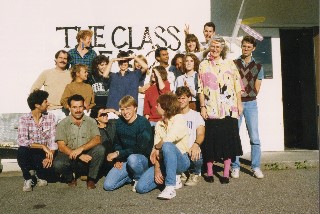 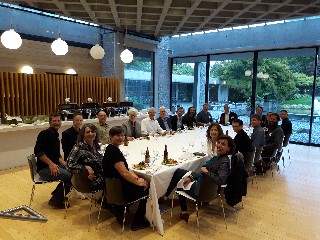