PLUME, which stands for Portable Laboratory for Understanding Human-Made Emissions was developed by Dr. Naomi Zimmerman, a professor of Mechanical Engineering who studies air quality and its impacts on health and the environment.

Watch out, Vancouver. The PLUME van is coming soon to a location near you.

An “air pollution lab on wheels”, PLUME will be used to measure concentrations of air pollutants across the city including carbon monoxide, carbon dioxide, ground-level ozone, black carbon, methane, volatile organic compounds, and various sizes of ultrafine particles that can affect air quality.

PLUME, which stands for Portable Laboratory for Understanding Human-Made Emissions was developed by Dr. Naomi Zimmerman, a professor of Mechanical Engineering who studies air quality and its impacts on health and the environment.

Dr. Zimmerman's team at IREACH lab will use air quality data collected by the van to build a map of the city, showing how levels of pollution components change over time.

“Using a mobile laboratory rather than fixed air quality sensors means we can cover a greater distance,” says Zimmerman. “We can sample anywhere from highways, to by the ocean, to the middle of a field with the same instrumentation in a single day. The instruments in the van can collect data as often as every second.”

Davi de Ferreyro Monticelli, a PhD student in the department of earth, ocean and atmospheric sciences usually drives the van along with one other person to monitor the instruments.

“PLUME enables us to access locations where it may be more difficult to install expensive monitoring equipment. As we move the van, we can also sample the air in transit and see in real-time how concentrations of multiple pollutants change—giving us an idea of the air quality in a specific location.”

While the van runs on diesel as there are no electric vans currently available in the market of the size required due to the size of the instrumentation, PLUME complies with the most rigorous emissions standards—the LEV III Super Ultra Low Emission Vehicle standards. Dr. Zimmerman adds: “The instrumentation is all electric, supported by an advanced inverter and marine batteries, making PLUME one of the most environmentally friendly mobile laboratories in the world.” 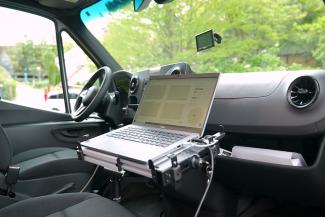 PLUME is already being used to collect information on unpleasant smells in Metro Vancouver.

Called Smell Vancouver, the project and its associated web app is as part of a larger effort to understand air quality and its implications for environmental injustice in the region.

“Our most socially and materially deprived communities are frequently exposed to disproportionate levels of air pollution and it’s important to understand their experience of air quality. Odours are important as well—cannabis odours, industrial odours, chemical odours and other unpleasant smells. Are the same communities struggling from odours also suffering air pollution?”

Ultimately the team hopes to start drawing links between air pollutants and odour.

“If we can start publishing maps of link to air quality and odour that would be really exciting and of course we would continue to engage with policymakers who are partners on almost every project that I work on to make sure the knowledge is disseminated and people can understand it and next steps can be taken,” says Zimmerman.