Todd Ablett, a teacher of competitive robotics at West Vancouver Secondary School, and Joe Muise, a science teacher at St. Thomas More Collegiate in Burnaby, are being honoured with the 2022 McEwen Family Teacher Recognition Award by the UBC Faculty of Applied Science.

The annual award, established in 2010 by Dr. James (Jim) McEwen and his family, aims to celebrate high school teachers who "go above and beyond teaching the curriculum to ensure their students succeed" both academically and personally. The award also aims to encourage UBC Applied Science students, who nominate their former teachers for consideration, to reflect on the impact their teachers had on their success.

A pioneering figure in the field of biomedical engineering, Dr. McEwen is a UBC Engineering alumnus and adjunct professor of electrical and computer engineering who established the award with his family in 2010.  This year they were kind enough to extend their generosity and recognize not one, but two incredible teachers, “we are thrilled both are UBC alumni!” added James Olson, Dean, Faculty of Applied Science.

Both recipients will receive $2,000 for their own professional development, while their schools receive $5,000 to spend on school enrichment activities,programs, or development. In addition, they will be asked to nominate a current high school student to receive a $5,000 entrance scholarship to attend UBC. The UBC Applied Science students who nominated the winning teachers will receive $1,000 respectively in recognition of their efforts.

Ablett was nominated by Joshua White, a student in UBC's Department of Engineering Physics, who attributed many of his personal successes and love of engineering to Ablett’s enduring mentorship in robotics.

In 2016, Ablett started the Robotics Academy at West Vancouver Secondary School to increase students’ opportunities for STEM education and to engage them in learning within a creative, exciting and competitive environment.

“The support Mr. Ablett gave was relentless,” White wrote in his nomination letter. “With the exception of a few rest days, [he] would spend every day after school working with students. [He] prioritizes removing logistical barriers for students [and] maintains a self-discovery approach to the learning process.”

The other recipient of this award, Muise, was nominated by Matt, a first-year engineering student at UBC who described his former teacher as genuinely caring and “committed to helping his students succeed not only in their studies but also in their activities outside of class.”

In his nomination letter, Matt describes Muise’s infectious enthusiasm for science and support for students to reach beyond the regular school curriculum. One example is the Students on the Beamlines team, a program run by Canadian Light Source, Canada’s national synchrotron light source facility. The program gives students the opportunity to conduct a research experiment using the facility’s synchrotron.

In his nomination letter, Matt wrote: “He wants all his students to experience the same joys that science has brought him. On a personal level, especially as a first-year engineering student, the lessons he taught me about being resilient in the face of immense challenges are as important as the lessons he gave about force vectors and electric fields.” 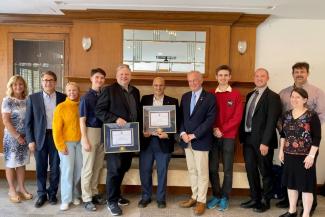 Nominations are now open for next year.