3 things you can do to encourage diversity in STEM

Anthonia Ogundele, Founder and Executive Director of Ethọ́s Lab, along with her father Gabriel Ogundele and her sister Francisca Ogundele—both engineers— hosted an intergenerational discussion as part of the Applied Science Anti-Racism Speaker Series.A recording of the session is now available.

With everything Anthonia Ogundele has going on, it’s a real mystery how she finds time to sleep. Being on the UBC Board of Governors is just one of the many roles she’s taken on in recent years. Anthonia spends much of her time empowering youth as the executive director of Ethọ́s Lab, an extracurricular learning academy for teens that uses culture and diversity to bring greater representation to STEAM. She founded Ethos Lab after unsuccessfully looking for an ideal place for her daughter to learn and have fun that also reflected her cultural identity and met her social needs.

“When I look and see who is shaping the world, it doesn’t represent the community around us,” says Anthonia. Despite not having a science background, the self proclaimed problem solver took matters into her own hands by doing the relevant research and creating a diverse space for kids. “I’m taking an anti-racist lens to this work,” she says. “There’s a real underrepresentation in STEM. Why? It’s a consequence of our cultural issues.”

When I look and see who is shaping the world, it doesn’t represent the community around us.

Anthonia credits her father for teaching her about humanity. He came to Canada as a Nigerian immigrant to do his engineering PhD much before Anthonia was born. “You would imagine there weren’t a lot of people who looked like him at the University of Calgary,” she says.

We may look different from one another but on the inside we want the same things: to be seen, heard, and respected. “Black Lives Matter is as much about policy change and allyship as it is about ‘Our lives matter,’” says Anthonia. It’s with “the humanity of the Black experience,” specifically, that she created a space where “Black youth feel respected, reflected, and protected. And when you create space for an underrepresented or marginalized community,” adds Anthonia, “you’re actually creating a more inclusive environment for everybody.” 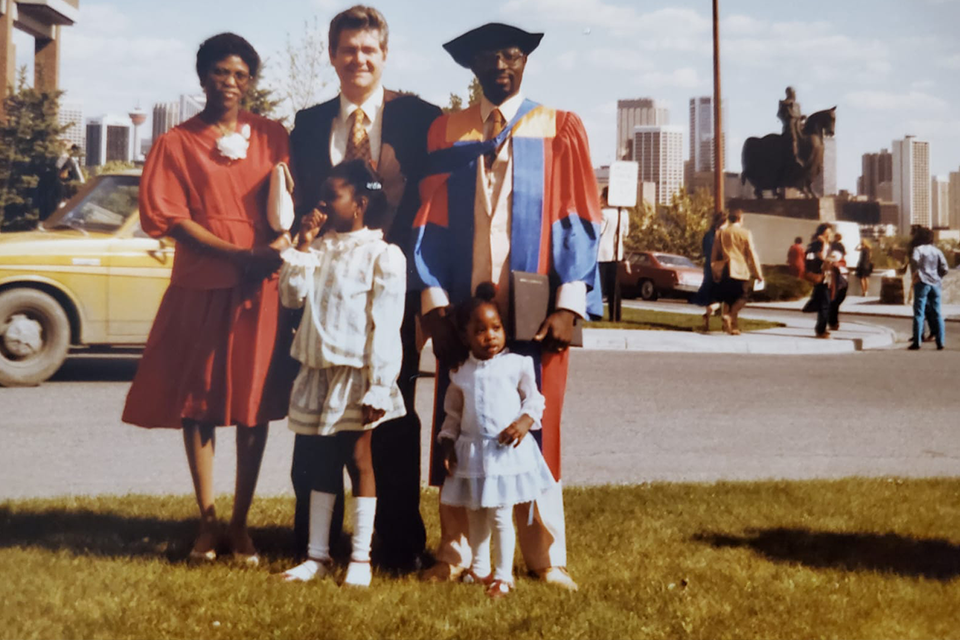 People always seem to want to share the books they’ve read with Anthonia. But she’d like folks to go beyond the reading and workshops, and actually have conversations with one another instead. Both with their own children, as well as with BIPOC. “It’s by time spent together that we expose our humanity and learn to respect one another,” she says.

Conversations lead to community, which is at the heart of Ethọ́s Lab. Mentorship programs can be fleeting but the learning academy’s member model ensures the youth participants have unrestricted access to their diverse instructors and other leaders from ages 12 to 18. This is especially important because it’s not something they’re experiencing anywhere else, according to Anthonia. “Black youth are now having the experience of seeing Black people in leadership (at Ethọ́s Lab), which they won’t get in the education system. At all.”

But it’s not just about Black kids seeing Black leaders, it’s also about all the other kids seeing BIPOC leaders. The more the kids see themselves in the leaders, the more likely they will become leaders themselves, as was the case for Anthonia watching her father and her sister (also an engineer) grow their careers.

Although Anthonia set out to create a space inspired by the humanity of the Black experience, what she has found is that the scope has widened to include others as well. “We have a lot of BIPOC young people, many of which are girls,” she says. Anthonia didn’t intend for Ethọ́s Lab to cater to any one gender or cultural group but she’s delighted by how everything has turned out. “When you start to build an inclusive environment it starts to include… everybody!” she says with a laugh.

Anthonia hosted the Applied Science Anti-Racism Speaker Series on February, 9, 2022. It was a true family affair as she was joined by her father, Gabriel Ogundele, a mechanical engineer, and her sister, Francisca Ogundele, a chemical engineer. Together, they had an intergenerational conversation on how they found their places in STEM.

Listen to the discussion