In the days after the horrific discovery of an estimated 215 children in a mass grave at the Kamloops Indian Residential School, I’ve had many conversations with family, friends and strangers. These were in person, over Zoom, and over social media. Some of these conversations included long uncomfortable pauses. There were many commonalities, but what stood out was the uncertainty people felt in how to support or contribute to healing. I can only offer what I’ve learned.

Editor's Note, May 25, 2022: Today we honour and commemorate the one-year anniversary of the discovery of the unmarked graves by Tk'emlúps te Secwépemc at the former Kamloops Indian residential school. Together we stand behind survivors and their families, and our UBC Indigenous community. It is incumbent upon each of us to strive towards reconciliation by showing recognition, compassion and kindness.

My immediate response was disbelief. Not because it couldn’t happen. The Truth and Reconciliation Commission (TRC), established as part of the settlement of the largest class-action lawsuit in Canadian history, had a limited mandate and records were withheld from various institutions. The former chair of the TRC, the Honourable Murray Sinclair, estimated the number of known children who died in the care of the residential schools was underestimated, and that we should prepare for more discoveries like the one in Kamloops. My source of disbelief was that Kamloops is the community where I was born and raised. I thought mass graves were something we only heard about in faraway, war-torn countries.

I became preoccupied with details of the discovery and what the community and local officials were saying. While still processing the news, the logical side of my brain began asking questions and proposing next steps. I think we need to ask more questions, including: What do the children’s communities want? Are these findings confirmed? Who will be held responsible?

While I grew up in Kamloops, I’m not from the Tk’emlups te Secwépemc First Nation. The children from my community of Sagamok Anishnawbek were sent to Spanish, Ontario and the St. Joseph’s Residential School for Girls and the St. Peter Claver School for Boys, which was later renamed St. Charles Garnier College. My mom, aunt, and grandma attended St. Joseph’s and my other aunts and uncles attended day schools. I recognize that there were 138 other residential schools, and the prospect of other undisclosed or unaccounted for burial sites rattled me. The callous indifference and disrespect paid to communities in pain when children did not return does not fade with time. “Your child ran away” is an anecdotal excuse often cited to parents who did challenge the system. I found myself asking, “Are we a country that conceals mass graves?”

Afterwards, my wife Jewell and I discussed the discovery with our daughter Cicada, who knows of her grandma's experience. Grandma Mabel is teaching her first language, Anishinaabemowin, to Cicada, and stories from Mabel’s childhood interweave those lessons, which include her eleven years at St. Joseph’s. Grandma has shared about her childhood antics with fellow classmates, ice skating in winter, dances held with the boys from St. Peter Claver, sneaking into the kitchen after hours, and some sad stories, too. We sheltered Cicada from the Tk’emlups news while we processed it, and when we did sit down to talk about it we were surprised to learn that she already knew something was wrong. Children sense strong emotions.

If reconciliation is viewed as an end goal rather than a journey, it can be easy to skip important steps along the way. The notion of truth is paramount. Exposing the truth about the experience of Indigenous Peoples requires listening, learning and reflection. Situating yourself within the Canadian context can be unsettling (no pun intended). Becoming an ally can require personal sacrifice of effort and privilege. Putting what you’ve learned into action takes leadership, and sometimes, a willingness to be led. This should sound hard. If you haven’t been scared away, then you’re probably ready for the journey.

Monday, May 31 saw an outpouring of support across Canada, which has thankfully continued. It has reinvigorated dialogue about reconciliation and what we’re doing to address injustices. Indigenous people and settlers alike must come together to advance reconciliation.

Following the Tk’emlups discovery, I also grappled with what I could do. Pandemic travel restrictions kept me from being with my mom in Kamloops. All I could think of was how to bring people together around this, how to turn this outpouring of grief and love into action.

We found a way to immediately communicate our solidarity with affected Indigenous communities and Survivors across Canada. On Sunday, May 30, Jewell, Cicada and I prepared the Engineering cairn on Main Mall with a fresh coat of orange paint with the plan of bringing a small group of friends together the next day to express the magnitude of the Tk’emlups find, and to simply be together. Monday, May 31, an informal community gathered to add handprints to the cairn. This group included undergraduate student Debalina Saha; Assistant Professor Pamela Wolf; Associate Dean, EDI, Dr. Sheryl Staub-French; Manager of Student Support Services Amy Vozel; and Senior Manager, EDI and Indigeneity Dana-Lyn Mackenzie joined via FaceTime, and me and my family. If we hoped to bring together a scaled-down version of our community, then we succeeded. There were raw emotions, conversations with people passing by and the comfort of completing a task with friends. I don’t know when it happened, but at some point, a weight was lifted from my shoulders. Community can do that.

We added 215 handprints to the cairn, which puts the number of children into perspective. The loss cannot be expressed adequately with words. In actuality, painting a block of concrete orange does not fix anything. However, sometimes actions can be symbolic, and the Engineering cairn is a prominent Applied Science fixture situated between the Reconciliation Pole and the Indian Residential School History and Dialogue Centre. We have plans to hold Orange Shirt Day activities again this September, which will include painting the Engineering cairn again. 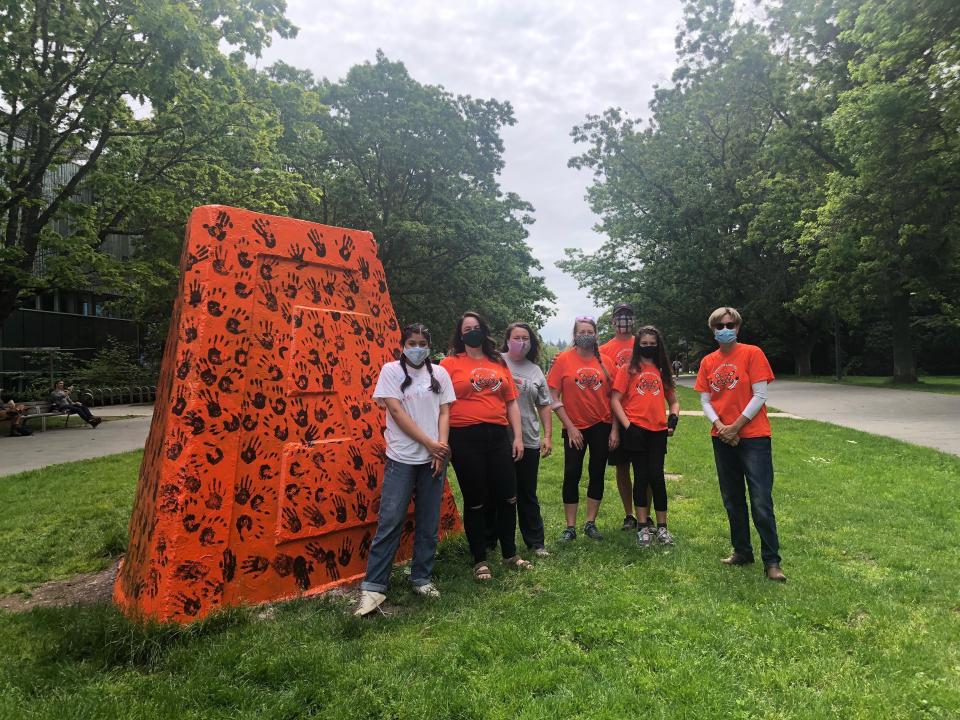 Actions, whether symbolic or not, can also create tangible change, and it is within everyone to find their own way to contribute to reconciliation. Inform yourself and teach a friend, reflect on your positionality and be an ally, lead change when you can, and support others when they need your help.

Sustainable, meaningful action is possible with awareness and understanding. We recognize an important step is to move beyond symbolic actions. The Indigenous History Month platform can provide us with opportunities for education and engagement. Each week for the next four weeks, at Applied Science, we’ll share a story, a resource, a truth and an action. We plan to cap off the month with an event that will inform and inspire our Applied Science community.

What I’ve learned in the past week is that it’s okay to flounder with uncertainty, and it especially helps if you have friends and family to help you find your feet. I’ve learned that we need to listen to and support communities who are missing children. What we’ve seen since May 27, and what we’ve always seen, is that Indigenous communities are strong and resilient, because their very survival has depended on it.

Engaging with Indian Residential School histories and legacies can lead to emotional reactions and (unexpectedly) difficult thoughts and feelings. Sometimes these can surface hours, days, or weeks later. This is perfectly normal. If you find yourself feeling overwhelmed, it is important to respect your needs and to be kind to yourself. For resources, visit IRSHDC.