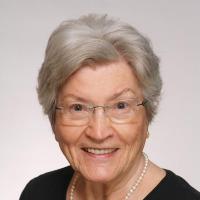 She also served as the Executive Director of the Western Institute for the Deaf and Hard of Hearing. A 1953 graduate of the Victoria Hospital School of Nursing, Marilyn earned her BScN at UBC in 1979. The challenge of acquiring a university education with a profound hearing loss, in a day when accessibility was an unknown concept, motivated her to focus on strategies to raise societal awareness of its significant individual and societal effects. This included involvement in forming the Canadian Hard of Hearing Association, and its growth and expansion across Canada.

Her PhD dissertation examined hearing loss in federal prisoners in B.C. and her continued research interest is in its psychosocial implications. Marilyn believes that opportunities have never been greater for creating positive social change for people with hearing loss. Her honours and awards include the Order of British Columbia, and the Queens’ Medals Honouring Volunteer Service in 1992 and 2002. The Canadian Hard of Hearing Association has named an award of merit in her name.