In recognition of International Women’s Day, Women in Engineering (WiE) UBC hosted a lively and inspiring event in the atrium of the Fred Kaiser Building today.

Attendees snacked on popcorn, snapped photos in an on-site photo booth and listened to speakers honour and support the recruitment, retention and advancement of women in engineering — a profession in which females continue to be significantly underrepresented.

The speakers included James Olson, dean of UBC’s Faculty of Applied Science, who praised UBC-based initiatives such as Geering Up, Together WiE Can and Engendering Success in STEM, and Sheryl Staub-French, a UBC professor of civil engineering and the dean’s adviser on equity, diversity and inclusion, who spoke about the strong influence her family and a university professor had on her decision to pursue engineering — and the role that supportive colleagues have played in keeping her and other female engineers there.

In British Columbia, women make up just 12 per cent of professional engineers and 19.1 per cent of students in post-secondary engineering and architecture programs. This decades-old imbalance is believed to be largely attributable to misconceptions about the engineering profession and gendered stereotypes, which can lead to bias and discrimination. 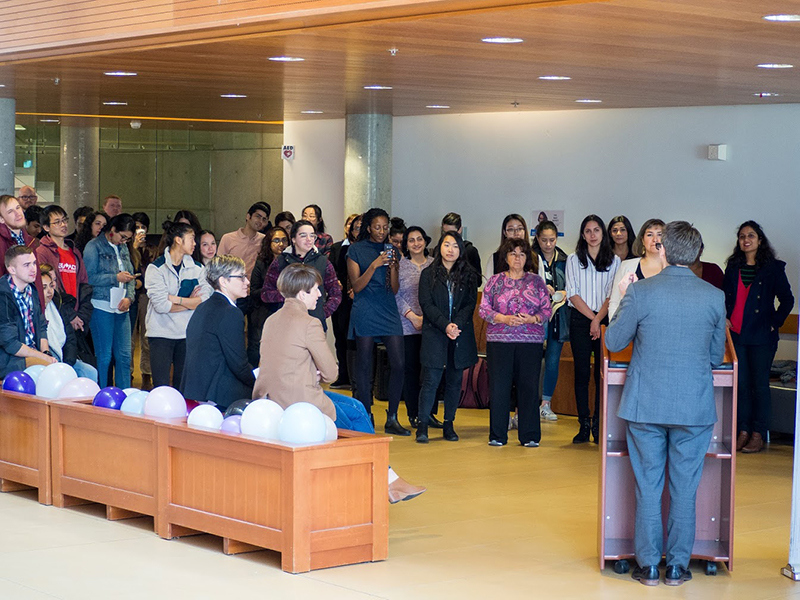 To help address the problem, educators and companies are encouraged to actively promote gender diversity and boost awareness of what the practice of engineering actually entails. This can involve providing role models, especially to elementary and high school girls; offering more leadership, mentoring and networking opportunities to young girls and women; and otherwise removing gender-related obstacles to entering and progressing within the engineering field.

“The thing that inspires me the most is our student leadership here at UBC,” said Staub-French. “Over the past 10 years, there have been so many women stepping up into leadership positions. Bowinn Ma, who’s now an MLA for North Vancouver. Andrea Palmer, Veronica Knott, Jeanie Malone. Kate Burnham, the new EUS President ... All of these people have shown what is possible for young women coming into our profession. So when we at Geering Up go out, these are the people that we highlight. We say, ‘Look, here are your role models. There is space for you. You will be included.’”

At UBC, inviting women students to study engineering increased female enrolment in first-year undergraduate engineering programs by 60 per cent between 2010 and 2014. Women now constitute approximately 32 per cent of UBC Engineering’s incoming class, one of the highest percentages in Canada. By participating in workshops, presentations, tours and mentorships, many girls — including those in Indigenous communities — discover that engineering is more inclusive and exciting than they might previously have assumed.

Such investments are not only more ethically sound, but may also lead to practical benefits such as increased profits, better governance and greater innovation. In addition, they are critical to helping Canada address a looming shortfall: according to Engineers Canada, the country will lack approximately 100,000 engineers by 2020.

Observed since the early 1900s, International Women’s Day is an occasion not only to celebrate women’s achievements, but also to inspire people to act to accelerate gender parity. WiE UBC is a student-run organization that advocates for gender diversity, equity and inclusion in engineering through workshops, panels and outreach initiatives.