The trains were the stars of the first of this year’s two MECH 223 Design Competitions, which aim to teach second-year mechanical engineering students engineering design by challenging them to tackle real-world design problems. The January competition, called Rail-Rider, tasked the students with building better-performing, yet still cost-effective, freight trains.

“Teams approached the challenge in various ways. Some added more motors, some used articulated cars. Others took the tracks slow and steady. Many of the rounds also required pulling heavy cargo loads,” says Agnes d’Entremont, PEng, one of the course instructors. “Several managed to climb a curved ramp and a 45-degree incline to reach the top — something existing trains wouldn’t be able to do.”

The winning team outfitted their vehicle, named “Mech 2: Electric Choo-Choo,” with no fewer than eight motors. (Other groups used just one or two.) However, the students were judged not only on their trains’ performance on the tracks, but also on how effectively they optimized material and energy costs. 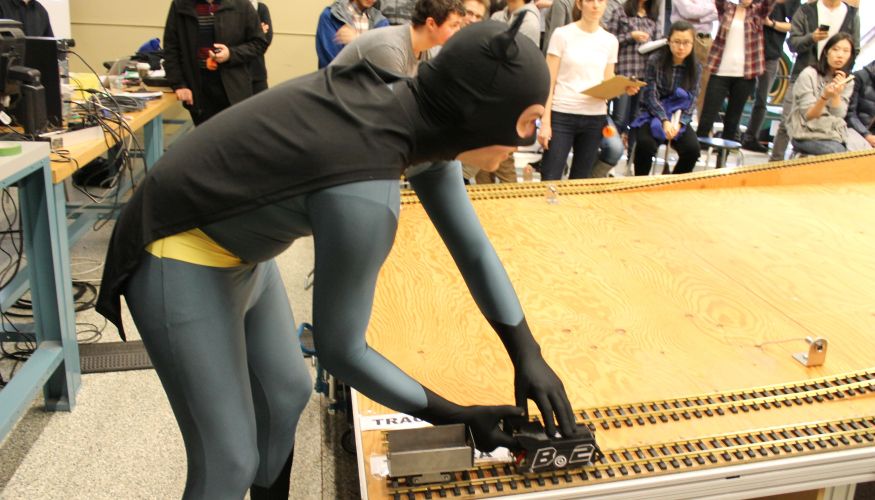 The event’s lively atmosphere was further enhanced by the presence of costumed characters such as Batman, a member of the “Batrain” team, and an enthusiastic group dressed up as old-timey railway engineers, complete with matching coveralls. At one point, Batman engaged in an intense cheer-off with the chief cheerleader for crowd favourite "The Chuggernauts."

Among the other teams were “Fleetwood Track,” “Rail Blazers” and “No Pain, No Train!”

Improved locomotive designs could not only prevent derailment-related disasters such as Lac-Megantic and Amtrak Cascades from happening again, but also dramatically reduce greenhouse gas emissions by boosting the viability of rail-based freight transportation over challenging terrain.

Video from the event: MECH 223 Competition.