Leaning on art to catch rays of light 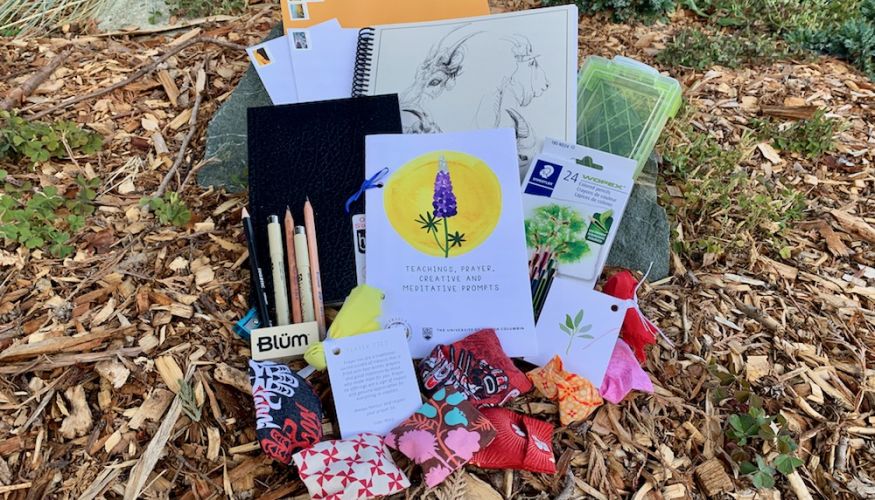 Supporting people in prison to create something beautiful during a dark and difficult time is how UBC school of nursing professor Helen Brown and her team describe their new program to deliver “art and reciprocity kits” to people disproportionately impacted by the Canadian criminal justice system.

The kits will be distributed across two medium-security federal prisons, five halfway houses and selected urban Indigenous community members across the Lower Mainland and Fraser Region starting this week. They contain beautifully crafted journals, sketchpads and other art and writing supplies, along with messages of support, Indigenous teachings, and writing and art prompts for creative activity.

The intent is for incarcerated people to create and share their art with other members of the community, including people at halfway houses and urban Indigenous clients served by the Fraser Region Aboriginal Friendship Centre Association (FRAFCA).

Ultimately, the project intends to expand across all seven federal prisons in the province and to additional halfway houses and Indigenous community organization and members.

“Efforts to prevent the spread of the COVID-19 virus have resulted in extreme social exclusion for people in prison, which negatively and unfairly impacts the mental health and wellbeing for people inside,” explains project co-lead Kelsey Timler, a PhD student in interdisciplinary studies at UBC. “Since mid-March, people in prison have not had access to in-person visits from friends, family and religious and spiritual leaders, and almost all programming has been cancelled. Time passes very slowly, which adds to the stress and anxiety of being incarcerated during a global pandemic. COVID-19 has exacerbated pre-existing inequities and finding ways to support community building and belonging is incredibly important right now.”

The UBC team was inspired by the Work 2 Give initiative, a partnership that was originally developed in a collaboration between the Correctional Service of Canada and the Tsilhqot’in First Nation. This initiative gave incarcerated men a creative outlet by providing materials to make items, including furniture, wood carvings, children’s toys, woven blankets and Indigenous cultural gifts such as drums and rattles, which were then donated to Tsilhqot’in communities. The UBC team were invited to study the program in 2014, a partnership that has expanded to include ongoing sustainability modelling and developing relationships with Indigenous communities to strengthen the initiative. In late 2019, Correctional Service of Canada began working with a new partnership with FRAFCA to support expansion of the project into urban Indigenous communities.

“Work 2 Give gave us the idea of assembling art and reciprocity kits that people in prison can use to produce something personal and meaningful to them,” said Helen Brown. “They can share the resulting art or writings with their family, or they can take part in a reciprocal sharing with the wider community. They can express themselves while still observing physical distancing, and art and writing shared between people in prison and people in the community can support social inclusion and a sense of belonging, of not being alone. In the future, we hope to expand this project to include a job creation program that provides dignified living wages for people leaving prison.”

She adds that like Work 2 Give, the current project is guided by Indigenous knowledge systems and a recognition of the ongoing impacts of colonialism on health, social and criminal justice inequities, including the unjust and disproportionate representation of Indigenous people in the criminal justice system.

“This is really important work. It helps connect the men to their culture and community and reinforces the work and teachings of our Elders,” said Elder Roberta Price, an Elder from the Coast Salish Snuneymuxw and Cowichan Nations who has worked with the UBC school of nursing for more than 10 years, providing Indigenous leadership and support on research projects about women’s intimate partner violence, mental health and equity.

“This initiative will support Indigenous men who are incarcerated,” said Dan Jack, Pacific regional administrator of Indigenous initiatives at Correctional Service of Canada. “The therapeutic kits being provided will assist offenders, particularly those with mental health needs and those experiencing feelings of anxiety by assisting these men to build healthy connections through writing and exchanges of artwork. Our hope is that participation in this initiative will increase feelings of connectedness and hopefulness. This partnership between UBC and CSC, in conjunction with CSC’s Indigenous Initiatives, Interventions, Community Corrections and Health Services departments, builds on the good work that has been done through the Work 2 Give project.”

This article was originally published on UBC News.