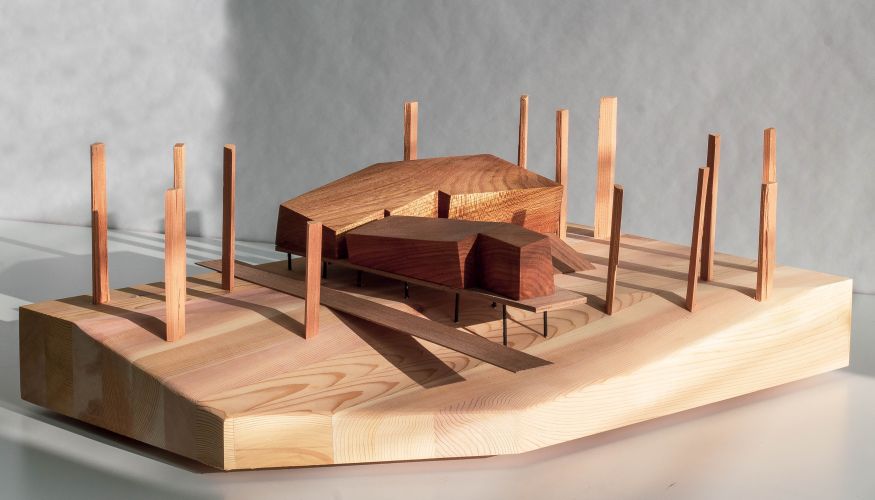 One day last fall, SALA student Justin McCarty visited the Cheakamus Cultural Centre near Squamish, BC. A place where people can learn about Indigenous culture and the environment, the Centre features, among other things, a reconstructed Coast Salish longhouse — that iconic rectangular structure whose location, building materials, features and detailing reflect not only the local environment, but also the Salish people’s culture and spiritual beliefs.

McCarty spent some time contemplating the architectural wonder, admiring the design and taking inspiration for his own work. “Even on clear days, longhouses are very dark when there’s no fire,” he said. “The only light that enters the building is through small breaks or slits in the siding, or a clerestory light. It’s quite different from Western practices, which tend to prioritize daylighting” — using windows and other openings to let sunlight in — “and outdoor views.”

McCarty was exploring the Centre as part of a SALA design studio course called “Coast: Detailing Narratives,” which aimed to encourage budding architects like him to think critically about “site, material, structure, and assembly” — four components of “the making of buildings and the cultural quilt of our communities”, according to course creator Joanne Gates, a SALA adjunct professor and a principal at Gates-Suter Architects.

“The studio arose from my fascination with the Squamish and Coast Salish canoe and how it embodies the community’s connection to the land, to material, to making and to each other,” said Gates. “It was a richly rewarding adventure with my students and with our Eslhá7an collaborators.” (Eslhá7an is a Squamish community in North Vancouver.)

Gates, who received the 2018 Arthur Erickson Memorial Award for emerging architects, has always viewed architecture as being an integral part of the cultural landscape. This may be why she kicked off her studio not with a session on buildings, but rather with a visit from members of the Squamish Nation, who gave the students a taste of their heritage through stories, song and group activities — an experience, McCarty said, which “led to a mapping of various elements that would later inform our work in design.”

But that was only the beginning: Over the rest of the term, the class participated in a series of paddle carving workshops with the Squamish canoe-making community, where they learned traditional and modern woodworking techniques, as well as how Squamish and Coast Salish tools and artefacts can serve as model methods of making (including carving, weaving and assembly). They also learned, as SALA student Meredith Yee put it, that “understanding and respecting a material, what it wants to do and what it doesn't, is fundamental to Squamish craft.”

As they carved and shared stories with two veteran canoe makers, the students came to acquire what SALA student Halley Sveinson described as a new “architectural language”. It was this language that they would use to create their final studio projects: a small canoe shed that would serve as a place not just for storing canoes, but also for gathering, making and teaching.

“The nomadic culture of the Coast Salish people and the removable wood panels of their traditional longhouses inspired me to re-imagine my building envelope as a fluctuating member — one that responds to seasonal changes and different programmatic needs,” said Sveinson. “The studio's attention to woodworking and to thinking beyond modern methods of construction — for example, by beginning at the scale of a single architectural detail and expanding to cover a building design project — has really influenced my work.”

Gates appreciated her students’ willingness to “listen, make, exchange, and learn” during the course, and to allow their experiences to inform their architectural proposals. Given the opportunity to teach another design studio, she would like to enrich the “detailing narratives” — “Detailing is like grammar,” Gates said, “and the resulting narrative weave the making of buildings” — by incorporating social issues, as well.

“Last fall, I discovered that on the reserve there is a housing shortage and limited employment opportunities for youth, and that health services rooted in First Nations traditions of natural healing are needed,” said Gates. “While I haven’t yet consulted with my Eslhá7an collaborators about this, a future studio could provide an opportunity for my students to speculate on how the architecture of housing and healthcare buildings might themselves reflect the aspirations of the community.”