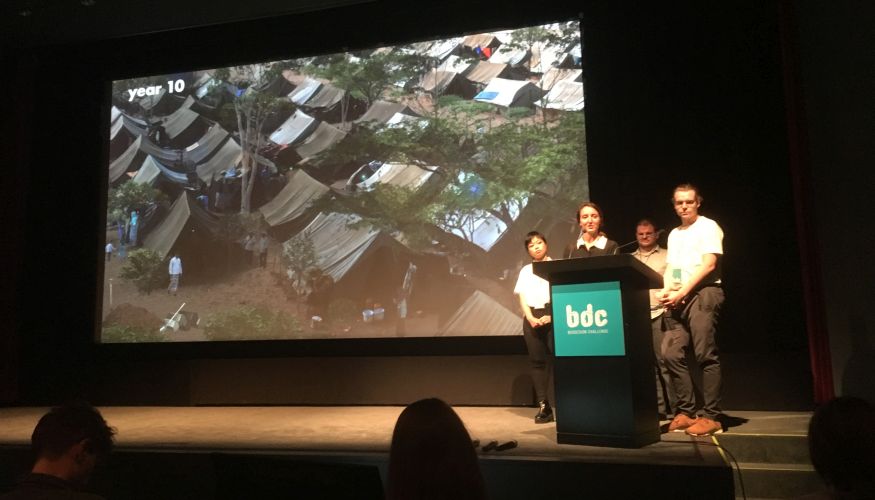 A team of UBC students, including several from the Faculty of Applied Science, has been named the Overall Winner of the Biodesign Challenge at the 2018 Biodesign Summit, which took place on June 21 and 22 at the Museum of Modern Art (MoMA) in New York City.

Out of 100 participating design teams from leading universities around the world, 21 were selected to present in the Challenge, a competition aimed at encouraging university students to design innovative new products and processes using living things. The teams showcased their projects to an audience of over 200 curators, artists, designers, scientists and others, including a judging panel consisting of many luminaries from the design world.

Led by Joseph Dahmen, an assistant professor in UBC’s School of Architecture & Landscape Architecture (SALA), and Steven Hallam, a professor in UBC’s Department of Microbiology and Immunology, the UBC team spent the past five months developing a proposal for a sustainable toilet made from mushroom mycelium. The MYCOmmunity Toilet is not only able to convert human waste into rich components of soil and fertilizer on-site using a unique blend of microbes, enzymes and minerals, but is also fully compostable itself.

The technology is targeted at the approximately 2.3 billion people in developing countries who lack access to adequate sanitation — particularly in underserved, densely populated communities such as refugee camps, where families often face rampant disease and environmental challenges such as soil erosion and flooding. Easily assembled and transported, the closed-loop sanitation system created at UBC can serve as a planter for trees, grasses and crops, as well as stabilize soils and enrich local ecosystems as it breaks down.

The UBC students presenting at the Biodesign Summit were Valerine Chandrakesuma and Laurence Crouzet, both MArch candidates at SALA; Jay Martiniuk, an MSc candidate in the UBC Faculty of Land and Food Systems; and Patrick Wilkie, a graduate of UBC’s Department of Electrical and Computer Engineering.

The project was supported by the Peter Wall Institute for Advanced Studies, where Dahmen and Hallam are Wall Scholars, and the Ecosystem Services, Commercialization Platforms and Entrepreneurship (ECOSCOPE) program, a one-year commercialization and industrialization program in which many of the UBC team members are involved. ECOSCOPE is open to students from various disciplines across UBC who are interested in using design to apply science to real-world issues.

As the overall winner, the UBC team will take home the Glass Microbe, a symbol of the intersection of art, design and biology created by UK artist Luke Jerram. In addition to the runner-up prize, other teams were recognized for Outstanding Field Research, Outstanding Science and Outstanding Presentation. The Animal-Free Wool Prize, sponsored by PETA, Stella McCartney and Stray Dog Capital, was awarded to the team that explored or developed a proof-of-concept for a sustainable biomaterial that could replace animal wool.

“These finalists were selected from a pool of 450 participants. I firmly believe that they are leading us into a sustainable future with their visions,” says Daniel Grushkin, founder and director of the Biodesign Challenge.

The student projects will be on display at a gallery exhibition, Nature/PostNature, at the Making Center of Parsons School of Design in New York City from June 21 to 24.

About the Biodesign Challenge

The Biodesign Challenge, a program of Genspace NYC, offers university students the opportunity to envision the future applications of biotechnology in a competition that highlights student work. BDC's goals are to prepare young artists and designers to work with emerging biotech; to build collaborations between artists, designers and biologists; and to engage the public with visions for the future applications of biotechnology. To learn more, visit biodesignchallenge.org.